Can Art Save The World?
Maybe Not, But It Can Reclaim
A Sense Of Identity And Hope.

driving along the freeways that encircle U.S. cities, one seldom sees the web of streets that course through neighborhoods. Some are pristine tree-lined avenues and others are have a little more character.

No matter what their condition, streets are a vital part of the community. For artists, streetscapes have become a canvas and their work is dramatically transforming many parts of the city, in very positive ways.

The city of Los Angeles is an intriguing canvas for various forms of street art. Since the 1970s, when graffiti began appearing in urban areas, street artists risked arrest as they expressed themselves with paint and distinctive typography. During that time, Chaz Bojorquez, one of LA's first street writers, got his start tagging. He then traveled the world to study how graphics and letters connote a sense of cultural identity. His work, and the works of many of the early street writers and artists, is now recognized as an important contribution to contemporary art.

Beyond tagging, though, are large murals rising from the blight in vivid color and staggering detail. They appear all over the city, on sides of buildings, in alleyways, and adorning freeway ramps. Scenes of history, pop culture, portraits, and abstract patterns bring brilliant color to dreary areas. The Mural Conservancy of Los Angeles is currently restoring several historic murals, many of which are in poorer neighborhoods.

Artist Jason Ostro, owner of Gabba Gallery in downtown LA, formed a public art initiative recently called The Alley Project, this mural-making collaborative is bringing artists from around the world to paint the alleys of Los Angeles, turning what were once eyesores into places people want to walk through and linger. Other cities like Atlanta, St. Louis, and Asheville have asked Ostro to help launch similar projects for them.

"The whole idea," Ostro says in a recent LA Times article, "was turn blight into bright." 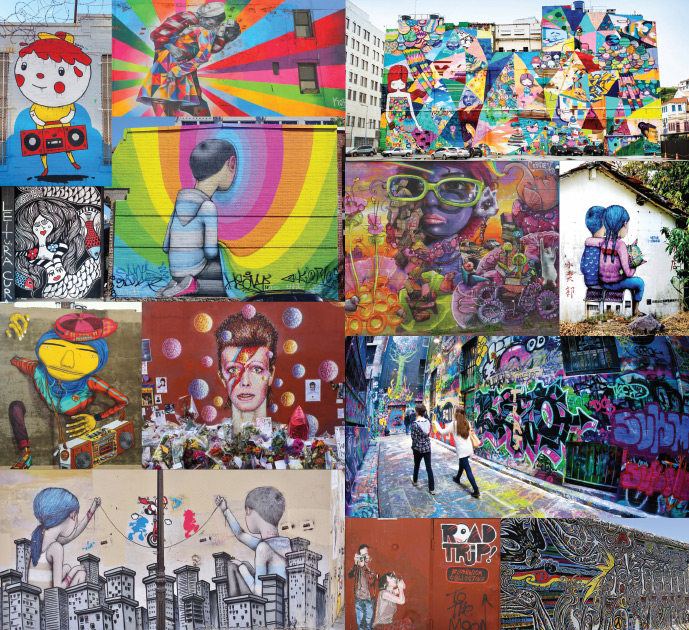