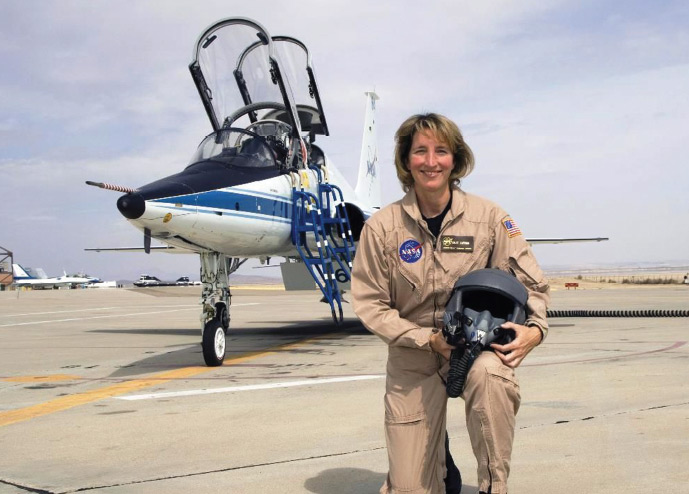 last year, Kelly Latimer, NASA Armstrong Center's first female research test pilot, joined Virgin Galactic as their newest spaceship pilot. A retired lieutenant colonel of the U.S. Air Force, Latimer has logged more than 6,000 flight hours and 1,000 test flight hours during her work with NASA, the Air Force, and Boeing. She also served as senior advisor to the Iraqi Air Force, flew more than 90 sorties in support of Operation Enduring Freedom and Operation Iraqi Freedom, and served as the 418th Flight Test Squadron commander. We caught up with this dynamic and accomplished pilot to find out more.

When did you first know you wanted to be a pilot? I began flying because I wanted to be an astronaut. My first flying experience was when I was at the US Air Force Academy. In the summer after my freshman year, I was in the gliding program where you learn to fly gliders and go for a solo flight at the end of the program. From the first few seconds of that solo flight. I knew I would fly for the rest of my life.

What do you love most about flying? I love the challenge of flying. Every flight is unique, and it gives me the feeling of leaving the ordinary world for a brief time to do something really special. Plus, you can't beat the view.

You are a veteran and retired US Air Force Lieutenant Colonel. Can you tell us a bit about your experiences? The experience I gained in the Air Force — flying high-performance jets and large multi-engine cargo aircraft all over the world — laid the foundation for everything I have been able to do in my career. Flying combat resupply missions in the Middle East is some of the most important flying I have accomplished. It also left me with a deep respect for all of the military aircrew I had the privilege to fly with.

How has being a woman affected your career as a pilot? Being a woman makes me stand out, because there still aren't that many professional women pilots. Being the only woman on an aircrew or within a flying organization allows me to bring a different perspective and demeanor to the group.

Have you ever been frightened while flying and if so, how do you maintain your composure? Some of the most stressful flying has been test flying where you are taking the aircraft to the edge of its controllability and combat missions flying into unknown territory. In the end I just rely on my training, make sure I am proficient, know the aircraft procedures, and have confidence in myself.

How did you come to be NASA Armstrong Center's first female research test pilot? I had previously applied to NASA Armstrong for a test pilot job when I was a new test pilot, fresh out of USAF Test Pilot School, and did not get selected. So I spent the next five years building up my test and operational flying experience. When I was getting ready to retire from the USAF, Armstrong was advertising two new test pilot jobs. I applied again and was selected.