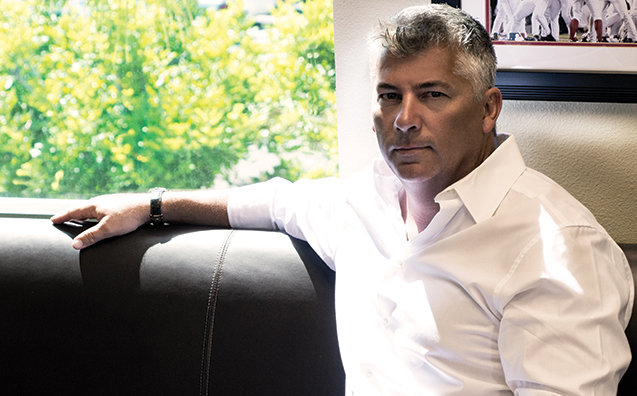 Growing up, you spent a lot of your time in nail salons and working with different products. What made you decide to start doing nails?
Here's the backstory: I loved playing little league baseball when I was younger. There was a pro-pitcher for the Los Angeles Dodgers who would come into my aunt's salon - he threw an awesome knuckleball. He would always come in and have a piece of acrylic nail put on his thumb to help his knuckleball. So when I was 11 years old, I actually went into the salon and started putting acrylic on my thumb so I would be able to throw a knuckleball. That's how I first got into doing nails.

What was the stepping stone that influenced you to pursue your career as a professional nail technician?
My family owned several nail salons around southern California. Initially, I didn't want much to do with the chain of salons, but one day, my aunt asked me if I would go and deposit a check for her at the bank. "Sure," I replied. As I was standing in line at the bank, I looked down at the check and thought to myself, "Wow?this is the kind of money you can make doing nails?" After that, I signed up for beauty school and received my license and started working at my family's chain of salons.

So that eventually led you to become a world nail champion. What was your first nail competition? Where did it take place?
At that time, there weren't many men working in nail salons, especially ones that were young - so I had to prove that I could do a better job. After I got to a certain point at the salon, I thought, "Maybe I can compete in nail competitions!" The very first competition I participated in was in Riverside, Calif. I didn't know much about the competition circuit and I thought it was pretty neat to be a part of it. In my very first competition, I placed third and made the mistake of not approaching the 1st place winner - Tom Holcomb - to get some insight and look at the winning nails. After that, I always made sure to talk to the other competitors - you'll always learn a lot that way.

Eventually, you did earn many first place titles. Tell us about that first competition where you placed first. What were your feelings at that moment when you won?
One of the competitions that I'm proudest of was the European Cup in Dusseldorf, Germany. What was really neat about that competition was that you got to up on stage and represent each of your countries. The fact that I got the chance to stand up on stage and represent the United States with the flag was pretty neat. It was also great to represent the United States in the competition a year after.

As a world traveler, you've been all around the globe. How did that help create Gelish? What was the process of Gelish developing into a brand and a product?
I've been developing products for the last 25 years in the professional nail industry, and I have to say that Japan is one of my favorite countries to visit. While consulting overseas and training in Japan, I noticed that the soak-off gel there was very time consuming. I decided then and there that I needed to make a product that was more "polish-like" but stayed on like gel. I worked in Japan for nine months to get the idea down and eventually went back to the U.S. and worked on the formulation for Gelish. As part of the application process, we wanted to make sure we achieved a couple things: 1. an easy application like polish and 2. we wanted it to cure in an LED light. It was also important that we got the application process down to 15 minutes.

Why do you think Gelish has been experiencing the success that it has?
Our industry was flat for quite a while so we really shook it up when we introduced Gelish. We were the first to market, the first to introduce LED technology, and we also created a product for professionals to use in the salon that actually lasts up to 21 days. I think that the biggest achievement is that Gelish removes easily without damaging the natural nails. Adding all those factors together, plus hard work equals a successful brand.

What are you really excited about, product-wise in the upcoming year?
I think that we're going to get better and better at what we do. We already have several formulations we're testing in the lab. Trends is really great: It's a fashion-forward product that is available in a soak-off gel application, which nobody is doing. We're introducing 16 different colors that tie together trends that are taking place in today's market. There are textures, glitters, and dots that look like nail art; but it's fashionable enough that you can wear it every single day. We're really excited about Trends.

What would you say is one of the biggest advantages that you have when it comes to new product development?
Whenever I'm in the lab, developing products, I always have that special and unique feeling that a lot of other manufactures don't. It's because I've worked in the salon, I do nails, and I know how it feels to work in the salon. That's the biggest advantage I have. I always think outside the box and never want to introduce just another "me too" product. I always want to make sure if we are going to come out with something, it will mean something to the industry and that it will also work in the salon.

You've mentioned that one of the most important aspects about becoming a nail tech is traveling and putting yourself out there. How have your travels impacted the industry?
It's hard to say because every time I go somewhere, I get to learn and experience something new. One of my favorite things to do when traveling is teaching. Going into a new country and introducing them to new products and techniques is the best part of this job. When you travel back to the country, maybe 5 or 10 years later, it's amazing to see what kind of impact education has had on their industry. That's definitely something that I'm proud of. I also love it when you see how passionate different places in the world are about nails, and to know that you played a part in that - it's an awesome feeling.