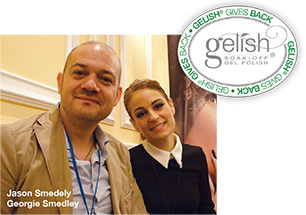 As a way to give back to the professional nail community, the team at Nail Harmony UK has launched Gelish Gives Back, a campaign to help 10 lucky youths break into the nail industry. "We've spent our lives, immersed in the professional nail industry and we've gained so much from it," says Director of Nail Harmony UK Georgie Smedley. "This is our way to give back to an industry that has inspired us throughout the years." Nail Harmony UK will be offering free training to five well deserving 16- to 25-year-olds in London, and five in north England. These young people, who will be hand-picked based on their applications, will receive two days of free training with Nail Harmony Educators, a qualification in manicure and Gelish gel-polish, and full kits, including an 18G LED light, 12 Gelish shades, and all the tools they need to propel themselves into a nail career they may not have had the opportunity to have thus far.

For a recent beauty industry awards show held at The Convention Centre in Dublin, Ireland, Gelish Ireland distributor Creative Academy presented nail looks for all the top models who appeared in the awards and runway show - which featured accredited designed Fydor Golan. With a Japanese inspired theme, the Gelish team really let their imaginations run wild. The nails were long, pointed, and stiletto - with extremely decadent and ornate nail art. Creative Academy also has been providing Gelish manicures for Irish TV personality Glenda Gilson, who is a huge fan of Gelish. Gilson has worn numerous Gelish colors while interviewing celebrities such as international boy band One Direction
and industry jet-setter and host of
"X-Factor" Simon Cowell.